Day 1 – Friday
Tel Aviv
Your adventure begins when you arrive at Ben Gurion. After checking in to your hotel, relax and unwind.
Day 2 – Saturday
Tel Aviv
Spend the day settling into the warm Mediterranean climate by exploring Tel Aviv at your leisure and acquainting yourself with the city. (B)
Day 3 – Sunday
CAESAREA • HAIFA • ACRE • ROSH HANIKRA
Today you will delve into some of Israel’s rich history by visiting Caesarea, the Roman capital and the largest port in the Mediterranean. Visit the incredible Roman Theatre which has been completely restored, the aqueducts and the Crusader City. Head up to Mount Carmel for a spectacular view of Haifa and then visit Af Al Pi Chen, one of the famous ships that illegally brought Jews to Israel’s shores after WWII. Wander along the old harbor and through the local market in Acre before making your way to Israel’s northern tip, Rosh Hanikra. Descend down the 210 foot cliff by cable car to see the spectacular caverns and grottoes carved out by the pounding waves of the Mediterranean. Experience life in a kibbutz by spending the night at Kibbutz Lavi. (B, D)
Day 4 – Monday
SAFED • GOLAN HEIGHTS •TEL-HAI
Start the morning off with a spiritual experience in Safed, the center of Kabbalah and Jewish mysticism, where you will visit the Joseph Caro and the HaAri synagogues and explore the picturesque artists’ colony. From here, take a jeep tour to the Golan Heights visiting a lookout over Kuneitra and the old Syrian bunkers; Tel Facher, a former Syrian outpost; and the majestic Banias Springs. Finish the day exploring Tel-Hai, a monument to heroism where the “Roaring Lion” commemorates the deadly battle of the Hula Valley pioneers in 1920. Return to Kibbutz Lavi for the night. (B, D)
Day 5 – Tuesday
TIBERIAS •BEIT SHE’AN • BEIT ALPHA • GAN HASHLOSHA • JERUSALEM
Stop in Tiberias to visit the grave of the Rambam, a great Rabbi and one of the most prolific and influential Torah scholars who also served as the personal physician of the Spanish King. Before heading to Beit She’an, known as the “City of the Scyths”, spend some time exploring Israel’s biggest archeological park with excavations from Roman and Byzantine periods. Make a quick stop in Beit Alfa to see one of the most beautiful mosaic floors in Israel before cooling off in the springs at Gan Hashlosha. Referred to as “The Garden of Eden”, the spring is located at the foot of Gilboa Mountain where King Saul was killed in the battle against the Philistines. Travel to Jerusalem for the night stopping at Mount Scopus before you enter for a blessing. (B)
Day 6 – Wednesday
JERUSALEM: THE OLD CITY
Start your day at Mount Zion where you will visit the incredible thousand-year-old building housing the Tomb of King David. Journey into the Old City through the Jewish Quarter stopping at Roman Cardo, the four “hidden” Sephardic synagogues that were built under Muslim rule and the Kotel Tunnels, housed beneath the city along the Western Wall. The presentation at the Davidson Center will give a taste of how the city has changed from the Second Temple period to present day. Head out through Jaffa Gate passing the colourful Arab bazaar and visit the Tower of David Museum to see the ancient remains from the First Temple period. (B)
Day 7 – Thursday
JERUSALEM: THE NEW CITY
Experience traditional Bar and Bat Mitzvah ceremonies at the Kotel before heading to Meah She’arim to experience the unique lifestyle of people in one of Jerusalem’s ultra-Orthodox neighbourhoods. Pass Israel’s parliament, the Knesset, before heading to the Israel Museum to check out the famous Dead Sea Scrolls and a model of how Jerusalem looked during the Second Temple period. Drive to Mount Herzl Military Cemetery and then brace yourself for a powerful journey through the Holocaust with a visit to Yad Vashem. End the day at the Ammunition Hill memorial and former Jordanian stronghold from the battle over Jerusalem during the Six-Day War. (B)
Day 8 – Friday
QUMRAN • MASADA • DEAD SEA
Spend the day out in the Judean desert stopping at Qumran, a site near where the famous Dead Sea Scrolls were found. From here, you will drive along the Dead Sea to Masada, the incredible fortress on top of a steep mountain which became the last stronghold for a group of Jewish zealots. After visiting the well-preserved remains stop for lunch at one of the leading hotels along the Dead Sea.Chance to float in the Dead Sea therapeutic waters. Spend the night in Jerusalem. (B, L)
Day 9 – Saturday
JERUSALEM
Spend your last day in Jerusalem exploring the city at your leisure. (B)
Day 10 – Sunday
JERUSALEM
Bid farewell to Israel as your journey comes to a close and you head back to Ben Gurion airport for departure. (B)

The above program can be extended or customized for groups. 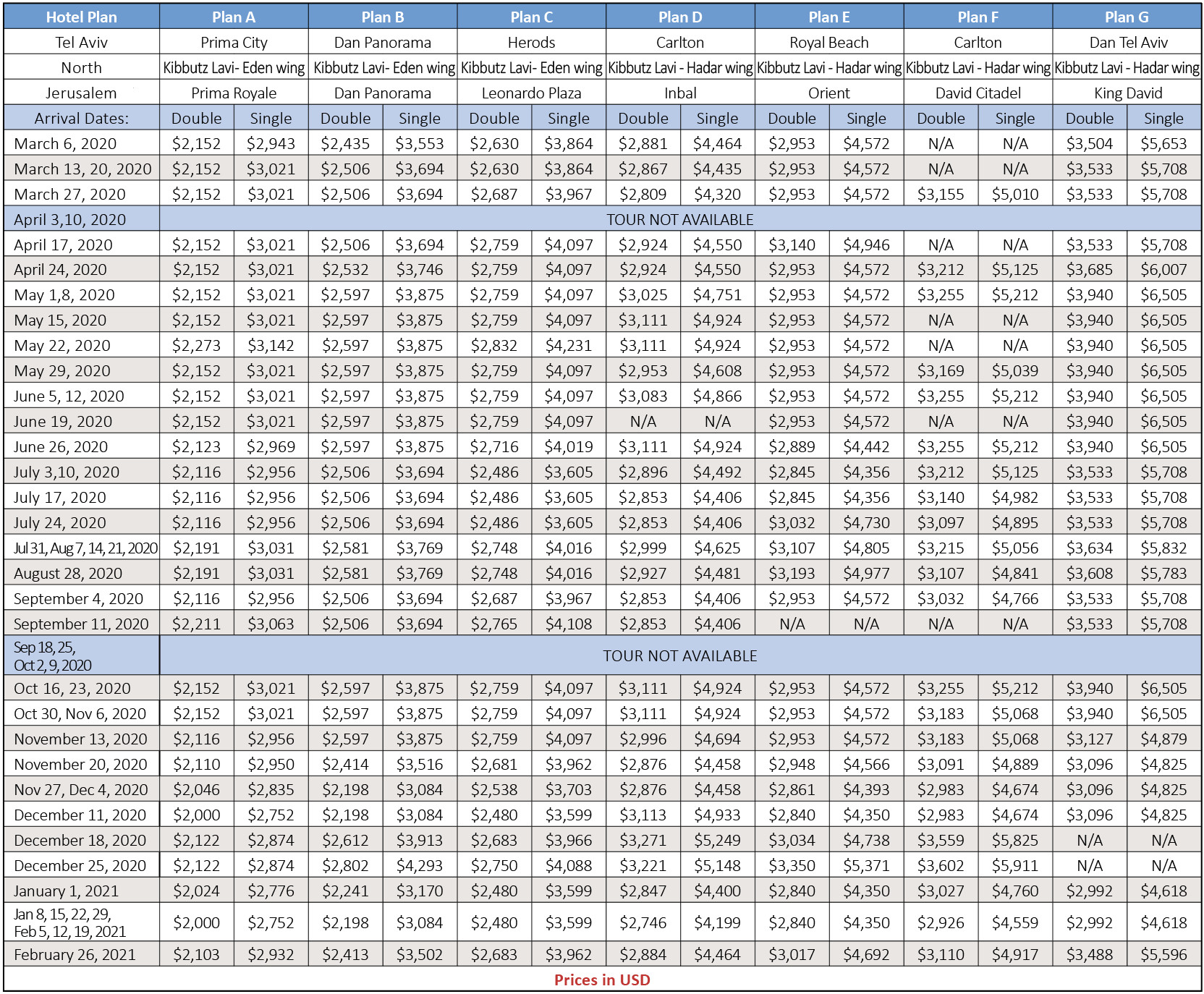