Tour with small groups of maximum 34 participants
Day 1 – Friday
Tel Aviv
Your adventure begins when you arrive at Ben Gurion. After checking in to your hotel, relax and unwind.
Day 2 – Saturday
Tel Aviv
Spend the day settling into the warm Mediterranean climate by exploring Tel Aviv at your leisure and acquainting yourself with the city. (B)
Day 3 – Sunday
CAESAREA • MEGIDDO • DRUZE VILLAGE • HAIFA
Today you will delve into some of Israel’s rich history by visiting Caesarea, the ancient Roman capital built by King Herod the Great, which was once the largest port in the Mediterranean. Here you will see the Roman Theatre, the aqueducts, and the Crusader City. Next, you’ll head to Megiddo one of King Solomon’s fortified city kingdoms famous for being the site of the epic Armageddon. These impressive ruins are more than 20 layers deep and show a long history of settlement. Daliat El Carmel, a Druze village is the perfect place to pick up lunch before you head to Mount Carmel for a spectacular view of the Bahá’í shrine, gardens and Haifa Bay. Learn about the religious kibbutz movement by spending the night at Kibbutz Lavi. (B, D)
Day 4 – Monday
SAFED • GOLAN HEIGHTS • WINERY
Start the morning off with a spiritual experience in Safed, the center of Kabbalah and Jewish mysticism, where you will explore the picturesque streets filled with ancient synagogues and artists’ studios. From here, head to the Golan Heights to view Kuneitra, old Syrian bunkers and the capital Katzerin. Indulge in some wine at a local winery before heading to Kesem Hagolan for a multimedia presentation that will give you a taste of everything the area has to offer. Spend another night at Kibbutz Lavi. (B, D)
Day 5 – Tuesday
NAZARETH • CAPERNAUM
Considered the cradle of Christianity, begin your day in Nazareth where Jesus spent his childhood and youth. Make a stop at the Church of the Annunciation, the site of Joseph and Mary’s home before heading towards Tiberias. Visit Capernaum, where Jesus began his teachings, sitting within the ruins of the ancient synagogue and visiting the octagonal church that was built over Peter’s house. Your journey continues to the Mount of Beatitudes where Jesus preached the “Sermon on the Mount”. End the day passing through Beit Shean, one of the most ancient cities in the country on your way to Beit Alfa, home to a beautiful mosaic floor depicting the zodiac. Spend the night in Jerusalem. (B)
Day 6 – Wednesday
Jerusalem: The Old City
Get a magnificent panoramic view of the Old City from the Mount of Olives before heading over to Mount Zion to visit the room believed to be the site of the Last Supper and the Tomb of King David, which is housed in an incredible thousand-year-old building. Continue into the Old City through the Jewish Quarter stopping at the Roman Cardo; the Herodian Mansions, which show how wealthy Jerusalemites lived 2,000 years ago; and the famous Western Wall (or, “Wailing Wall”). Continue through the Old City along the Via Dolorosa to the Church of the Holy Sepulcher where the crucifixion, burial and resurrection of Jesus took place. Travel to Bethlehem* to visit the Church of Nativity, Manger Square and Rachel’s Tomb. (B)

Day 7 – Thursday
Jerusalem: The New City
Delve into the “Old & New” starting at the Israel Museum to check out the famous Dead Sea Scrolls and The model of Jerusalem from the Second Temple period. Take a tour of the Knesset, Israel’s parliament, and then brace yourself for a powerful journey through the Holocaust with a visit to Yad Vashem followed by Mount Herzl Military Cemetery. Next, head to Meah She’arim, one of Jerusalem’s most interesting neighbourhoods, to get a rare glimpse of ultra-Orthodox life. In the evening, enjoy a typical Middle Eastern feast before catching the popular “Sound & Light” show at the Citadel. (B, D)
Day 8 – Friday
QUMRAN • MASADA • DEAD SEA
Spend the day out in the Judean desert stopping at Qumran, where the famous Dead Sea Scrolls were found. Then drive along the Dead Sea to Masada, an incredible mountain top fortress built by King Herod in 30 BCE and later the last stronghold for a group of Jewish zealots whose tragic story has become a symbol of perseverance, faith and ambition. The well-preserved remains are accessed by cable car and offer an incredible view of the Roman camps and the Dead Sea. Finish the day “floating” in the salty therapeutic waters of the Dead Sea, which at 1,300 feet (400 meters) below sea level, is one of the lowest points on the earth. Spend the night in Jerusalem. (B)
Day 9 – Saturday
Jerusalem
Spend your last day in Jerusalem exploring the city at your leisure. (B)
Day 10 – Sunday
Jerusalem
Bid farewell to Israel as your journey comes to a close and you head back to Ben Gurion airport for departure. (B)

The program above can be extended or customized for groups. 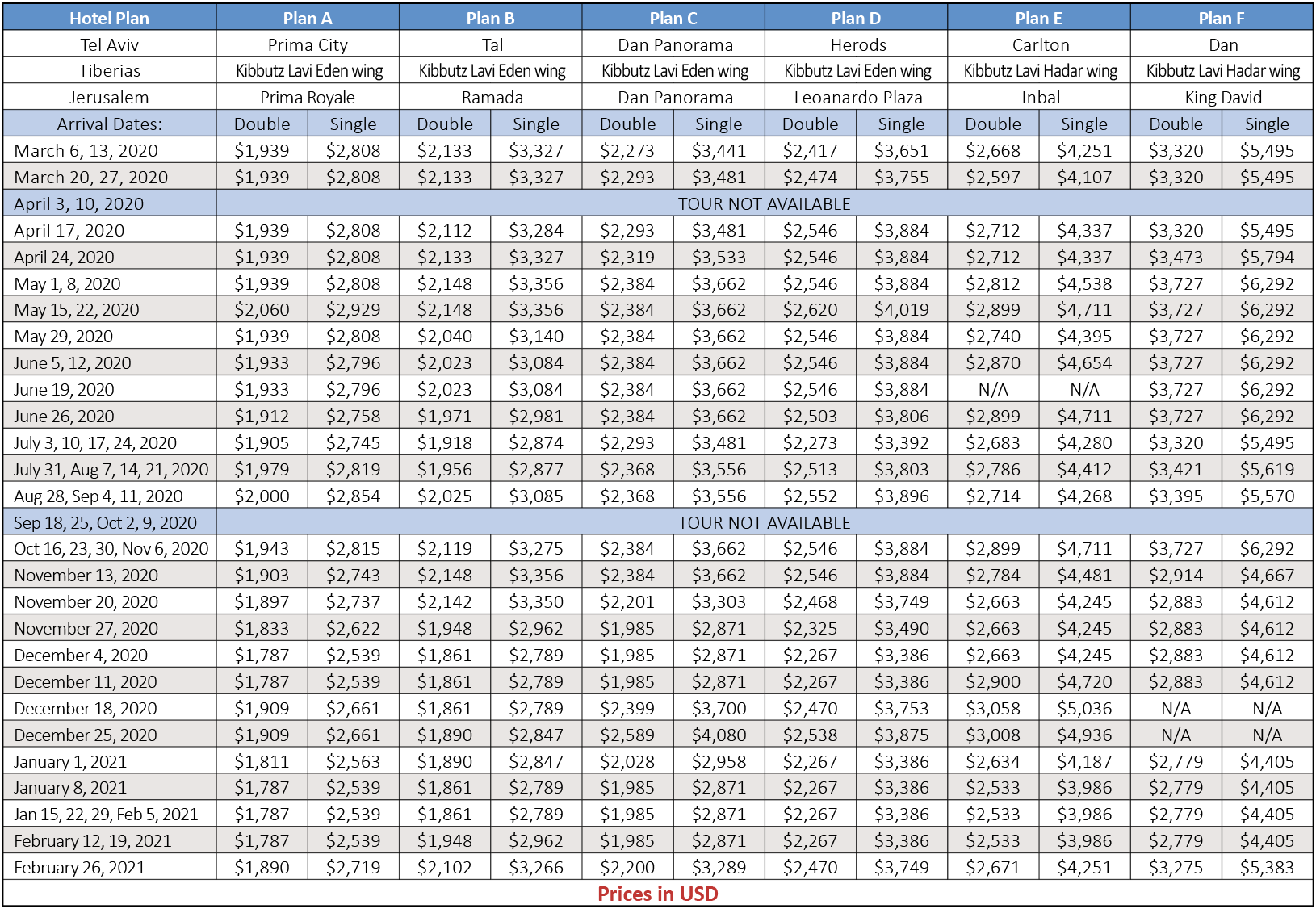