Day 1 – Wednesday
Arrival
You will be greeted at the airport by our local representative and transported to your hotel. Along the way, enjoy your first taste of the sights and sounds of this remarkable city, birthplace of the West.
Day 2 – Thursday
Athens
Don’t skip breakfast. Our guide today will take us through three thousand years of history and sights that will leave you breathless. Under the towering Acropolis – impossible to ignore from anywhere in the city – we travel back in time. First, you’ll marvel at the sheer scale of the Olympieion, the Temple of the Olympian Zeus, the largest temple in Greece; the project started in the sixth century BC and said to have taken 700 years to complete. You’ll get a sense of the direct transmission of Greek culture to Rome (and from Rome to all of us) when we view the Arch of Hadrian, erected to mark the boundary of the city in 132 A.D. Inscriptions here make clear that one side is the “city of Theseus (Athens)”, but the other is that of Hadrian (or “Hadrianopolis”). Appropriately, as we leave the ancient for the modern, we pass by the Panathinaiko (Panathenaic Stadium), built on ruins of an ancient stadium to host the first modern Olympic Games in 1896. Café -lined Syntagma (Constitution) Square, really the center of the city, is our next point of orientation. To our east is the Old Royal Palace, fittingly now the Parliament, and the Memorial of the Unknown Soldier. The National Library is but a few blocks to the north and we will make a stop at the New Royal Palace (now Presidential Mansion), sited along one of the most beautiful streets of the city and directly across from the National Gardens. Our tour to this point is really a preamble for our next stop, the Acropolis. You’ll enter the Acropolis by the same steps as did Pericles, Hadrian and Lord Byron, past the charming Temple of Athena Nike, through the Propylaea and find yourself in the shadow of that most famous of ruins, the Parthenon. In its life, it has been a temple, a church, a mosque and a store room (sadly, for gunpowder) yet it still stirs the soul and fires the imagination of generation upon generation. It is, quite simply, the soul of Greece. This afternoon is yours to enjoy as you wish – a siesta, maybe shopping or a visit to one of the many museums (the new Acropolis Museum is stunning). Tonight you’ll stay in Athens and enjoy one of the most compelling views anywhere. (B)
Day 3 – Friday
Cruise to Mykonos
Today we celebrate the sea. After breakfast you’ll board the cruise for Mykonos, (departure from Port of Lavrio) a dazzlingly – bright island with a sophisticated “jet-set” atmosphere. Stroll at your leisure through white-washed, flower-draped alleys, visit the church of Paraportiani or perhaps just enjoy a glass of wine on the promenade and savor the views. Tonight we’ll sleep aboard ship. (B, D)
Day 4 – Saturday
Kusadasi • Patmos
This morning’s port of call is Kusadasi, (Turkey). Enjoy your Excursion to Ephesus – no finer example of a Greco-Roman city exists…This afternoon we’ll set sail for Patmos, a rugged island, pivotal in the early years of Christianity and home to the beautiful and tranquil Monastery of St. John. Again, we’re on board for the night. (B, L, D)
Day 5 – Sunday
Crete • Santorini
Arrive in Heraklion early this morning. Crete is the largest and the most rugged of the Greek islands. the home of the great Minoan Civilization and the mythological home of Zeus. The palace at Knossos was an intricate collection of over 1,000 interlocking rooms, including the Hall of the Royal Guard, the Hall of the Double Axes, the King’s Chamber with the alabaster throne, the Queen’s Apartment, as well as beautiful courtyards and shrines. The palace was used as a religious and administrative center, as well as for workshops for artisans and food processing. The ruins have largely been excavated and much of them colorfully painted and restored, decorated with frescoes and shields. Enjoy your Excursion of the Minoan Palace of Knossos. Back in Heraklion the open air market is a must-see, where a boisterous crowd buys and sells everything from goats and sheep to huge cauldrons of fresh yogurt. Other points of interest here include the Archaeological Museum, one of the finest in Greece, housing exquisite findings from Knossos and other Minoan ruins, numerous Venetian fortresses, fountains and loggias scattered throughout the city and the Historical Museum of Crete, with its Byzantine and folklore collections. Arrive this afternoon to the striking island of Santorini, which is a volcanic crater immersed in the sea. The island is famous for its breathtaking and rugged landscapes, whitewashed houses, open-air cafes and glittering boutiques which cling to steep cliffs, accessible by foot, cable car or mule. You can choose excursion to admire the panoramic view of the Aegean Sea and the neighboring islands. Built on the Caldera rim, Oia Village is an excellent example of Cycladic architecture. Explore the village walking along the cobble-stone streets and the white washed houses with blue shutters where one gets the impression that they are a beautiful travel poster. (B, L, D)
Day 6 – Monday
Athens
Your Aegean cruise ends this morning at the Port of Lavrio. The day is yours to spend as you wish — Athens won’t run out of things that inspire exploration. We’ll spend our last night here. (B)
Day 7 – Tuesday
Departure
After breakfast, we’ll bid farewell to the friends we’ve made, exchange some numbers and transfer to the airport for our flights. No doubt you’ll spend the flight home going through countless photos and reliving moments of this remarkable trip. (B) 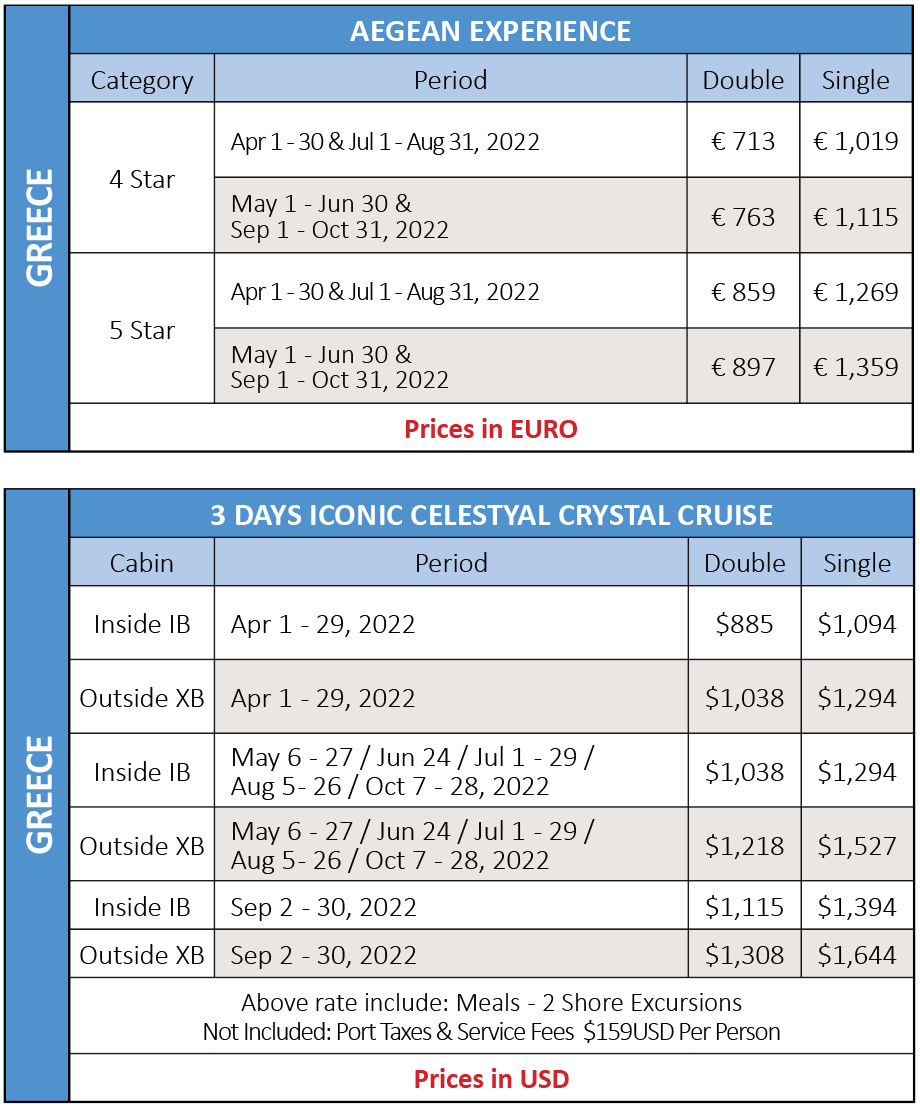